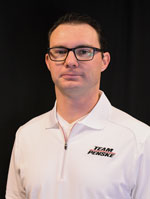 With seven successful NASCAR Cup Series (NCS) seasons already under his belt - including a championship performance in 2018 - Samuel "Miles" Stanley looks forward to new challenges and opportunities in his ninth with Team Penske in 2021. Stanley hopes to build on a strong 2020 season as he will continue to serve as race engineer for the No. 12 Menards/Advance Auto Parts/DEX Imaging/BODYARMOR Ford Mustang this season, once again working with crew chief Todd Gordon and driver Ryan Blaney.

Stanley will also have a new role in 2021, serving as crew chief for the No. 33 Ford Mustang that will compete in select Cup Series races this season with reigning NASCAR Xfinity Series champion Austin Cindric behind the wheel.

Stanley joined Team Penske's established No. 22 team prior to the start of the 2013 race season. Working with Gordon and driver Joey Logano, Stanley helped lead the team to 21 wins, 100 top-five finishes and 159 top-10 results over six productive seasons. The team also qualified for the Championship 4 race three times, winning the NCS Championship in 2018.

After finishing fifth in the NCS standings in 2019, Gordon and Stanley transitioned to the No. 12 team in 2020. The combination battled for race wins throughout the season and Blaney continued his streak of four consecutive seasons with a win and playoff berth as the No. 12 Ford team finished the year ranked ninth in the final series standings.

Stanley, a native of Akron, Ohio, attended the University of Akron and graduated with a degree in mechanical engineering in 2007. It was during his time in college that Stanley was bitten by the racing bug. As part of the Formula SAE program at the University of Akron, Stanley built Formula-style open-wheel cars and was able to travel both inside and out of the country to places like England and Germany, competing against other school's SAE programs.

After completing college, Stanley began his career in open-wheel racing, working from 2005-2008 for Polestar Racing Group in the Champ Car Atlantic Series. During his time there, Stanley served as both an engineer and crew chief and worked with several drivers including Katherine Legge and Alex Barron. While teamed up with Legge, Stanley was able to win three races and the team finished third in the 2005 series championship standings.

In 2009, Stanley transitioned from open-wheel to stock cars, as he joined Robby Gordon Motorsports. First serving as race engineer, Stanley moved his way up to the crew chief position for Gordon's part-time NASCAR Cup Series team.

In addition to his role with Gordon's stock car program, Stanley also worked on the team's off-road efforts, including the Dakar Rally and the Score Off Road Championships. In one of the favorite motorsports moments of his career, Stanley was a part of Gordon's Dakar Rally run at the beginning of 2012. The team won five stages of the prestigious off-road event and eventually finished fifth overall.

Stanley joined BK Racing in the Cup Series for the 2012 season as the head of racetrack engineering. He oversaw the engineering programs on both the No. 83 and No. 93 NCS cars before he got the opportunity to join the Team Penske for the 2013 season.

Stanley resides in Mooresville, NC with his wife Sarah and two sons. In his spare time, he enjoys working on motorcycles and classic cars and he is an avid cyclist.