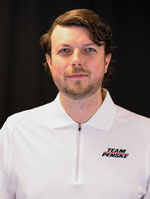 With a strong and diverse background in international open-wheel racing, Gavin Ward joined Team Penske as a race engineer in early 2018. Ward worked with Brian Campe, who served as lead engineer for the No. 2 Hitachi Team Penske Dallara/Chevrolet driven by Josef Newgarden, just months after the team’s IndyCar Series championship in 2017. Since he joined joining the team, Ward has been a part of 11 wins for the car raced by Newgarden. The 2021 season will mark Ward’s third year guiding the team’s program as lead race engineer.

Prior to joining Team Penske, the Toronto native served as an aerodynamicist for three seasons at Red Bull Racing in Formula One. Prior to that, he spent nearly a decade working as an F1 engineer with drivers including David Coulthard, Sebastian Vettel, Mark Webber and Daniel Ricciardo, as he was part of three constructors’ titles. Ward also contributed to Ricciardo's F1 win at Ward's home Canadian Grand Prix in Montreal during the 2014 season, as well as the team's four drivers’ titles.

Ward joined the Red Bull team as an intern and within just six months, he was brought onboard full time as he worked in various roles, including trackside control systems engineer, tire & vehicle dynamics engineer and as a race engineer.

Ward began his journey in motorsports by volunteering for a Formula Ford team headquartered just down the road from his hometown of Toronto at Canadian Tire Motorsport Park. The track was conveniently located next to his grandmother’s house. Ward went on to attend Oxford Brookes – a prestigious school where many F1 engineers learn their trade. While at the school, he earned the opportunity for the internship at Red Bull Racing, which opened up the door to his career in motorsports.