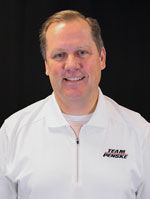 Gordon provides a wealth of experience and an impressive track record of success to the team. Since 2013, Gordon has helped produce 22 Cup Series wins, including the second Daytona 500 victory in Team Penske's history in 2015, before leading the No. 22 Ford team to the series championship with Logano in 2018. Following a strong 2020 season that saw the Blaney/Gordon combination consistently battle for race wins and produce Blaney's fourth consecutive season with a win and a playoff berth, the team strives for more success this season.

Gordon, who earned a mechanical engineering degree from Clemson University, has been a crew chief several times throughout his career. Before arriving at Team Penske, he also served as race engineer for Diamond-Waltrip Racing where he helped guide its drivers to eight top-five results, 13 top-10 finishes and three poles.

As a student at Clemson, Gordon took a job building race engines in upstate New York. He then built a limited super modified racecar as his college senior project, which he raced for three years at Oswego (N.Y.) Speedway. In late 1998, Gordon moved to North Carolina to work for the then-NASCAR Busch Series team run by Phil Parsons. The 2000 season saw Gordon transition to Joe Gibbs Racing (JGR), where he began as a fabricator and mechanic. He remained at JGR through the middle of the 2002 season, eventually working his way up to race engineer.

By May of 2002, Gordon had found a home at PPC Racing. His first experience as a crew chief came at the end of the 2004 season when he was selected to lead the No. 22 team for the first time in his career. In April of 2007, Gordon was named crew chief and GM of CJM Racing. After getting that team up and running, Gordon moved to Baker-Curb Racing in October of 2008. He remained there until the end of 2009 before becoming race engineer at Diamond-Waltrip Racing.

The native of Camden, NY, was named crew chief of the defending champion Team Penske NASCAR Xfinity Series No. 22 team in December of 2010. He continued the successful legacy of the Discount Tire team as he led the group to six more wins, 14 top-five results and a fifth-place finish in the owner point standings in 2011.

Gordon became crew chief for the No. 22 NASCAR Cup Series team in December 2011. After a challenging 2012 season which saw the No. 22 Shell-Pennzoil team switch drivers at mid-season from AJ Allmendinger to Sam Hornish, Jr., Gordon helped the team produce a pole-winning effort at Kansas, followed by top-five finishes at Martinsville and Watkins Glen and four more top-10 results.

Since 2013, Gordon directed the No. 22 team to 100 top-five finishes. The team also qualified for the Championship 4 race in three out of his last six seasons with the team, producing the NCS championship (2018) and a runner-up finish in 2016.
As the Team Penske Cup Series crew chiefs and teams realigned prior to the start of the 2020 season, Gordon transitioned to the No. 12 Ford Mustang with Blaney behind the wheel.

Away from the track, Gordon enjoys aviation and restoring classic muscle cars. He resides in Mooresville, N.C. with his wife, Amy, and their two daughters, Kali and Ashlyn.