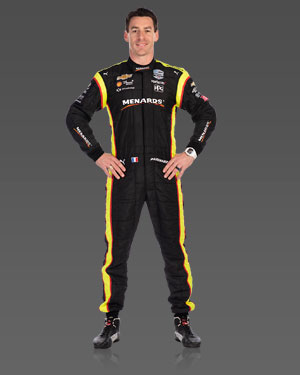 In his seventh season racing for Team Penske, Simon Pagenaud and the No. 22 Menards Dallara/Chevrolet team look to return to the NTT INDYCAR SERIES mountaintop in 2021. Pagenaud, a former series champion and Indianapolis 500 winner, recorded a win at Iowa and three podium finishes in 2020 and the team is aiming even higher this season.

Over the course of his 10 INDYCAR SERIES seasons, Pagenaud has scored 15 career wins, 14 pole positions, 35 podium finishes and the 2016 series championship. He continues to be one of the most consistent and productive drivers competing in the NTT INDYCAR SERIES. Racing through the challenges of the COVID-19 global pandemic and a different car design featuring the new aeroscreen in 2020, Pagenaud turned a strong start to the season into an eighth-place finish in the final series standings.

After posting consecutive podium finishes at Texas Motor Speedway and the Indianapolis Motor Speedway road course to open the delayed 2020 season, Pagenaud scored his 11th win with Team Penske by driving to victory in the first race of a doubleheader weekend at Iowa Speedway last season, leading 83 laps along the way. Returning behind the wheel of the Menards Chevrolet, Pagenaud looks to guide the No. 22 team to another Indianapolis 500 victory and series title in 2021.

Pagenaud enjoyed one of his best seasons in racing in 2019. The native of Montmorillon, France drove his way into the history books by capturing his first Indianapolis 500 win - the first Frenchman to win the legendary race in 99 years. The dramatic triumph in the No. 22 Menards Chevrolet marked Team Penske's record 18th Indianapolis 500 victory, and it gave Pagenaud a true sweep through the month of May following his win in the INDYCAR Grand Prix and the pole position for the Indianapolis 500. A final victory on the streets of Toronto, four podiums and three poles resulted in the series runner up position behind teammate and champ Josef Newgarden. It marked the third time in four seasons that Pagenaud finished among the top two drivers in the championship standings, including his title-winning season of 2016.

Before becoming a champion in America, Pagenaud competed in Europe's Formula Renault for several years before moving to the United States in 2006 to compete in the Champ Car Atlantic Series with Walker Racing and Team Australia. In his rookie season of Champ Car Atlantic, Pagenaud captured the series title over current NTT INDYCAR SERIES driver Graham Rahal. Pagenaud applied the prize money won from that season towards a 2007 Champ Car World Series opportunity with Walker Racing and Team Australia, where he was a teammate to current Team Penske driver Will Power. Pagenaud finished eighth in the 2007 Champ Car World Series standings.

He shifted gears to sports car racing in 2008 and posted 10 wins over six seasons, winning the 2010 American Le Mans Series title. Pagenaud returned to INDYCAR in 2012 and produced four victories for Sam Schmidt's team while finishing in the top five in the championship standings for three consecutive seasons. The consistently impressive performances attracted the attention of Team Penske and the organization expanded to include Pagenaud with the newly formed No. 22 Chevrolet team in 2015. Though he showed consistent speed in his first season with the team, Pagenaud caught some tough breaks but still earned a pair of podium results and pole position.

His second season with Team Penske proved magical for Pagenaud as he was crowned 2016 INDYCAR SERIES Champion after leading the series in just about every key statistical category including wins, poles, podiums and laps led. The Frenchman's first INDYCAR title represented the 14th open-wheel racing crown for Team Penske, coming in the organization's landmark 50th season of racing. He produced five wins and seven pole awards in 2016, edging teammate Will Power for the title when Pagenaud won the series finale at Sonoma Raceway in convincing fashion. The championship run led a Team Penske 1-2-3 finish in the season standings.

Pagenaud followed up his title-winning 2016 season with a run at back-to-back championships before falling just 13 points shy of teammate Newgarden to finish as series runner up in 2017. Driving the champion's No. 1 car in 2017, Pagenaud garnered his first career oval win at Phoenix Raceway and he captured a second straight season-ending triumph at Sonoma Raceway. He led the series with 13 top-five finishes and became just the second driver in series history to complete every lap of competition.

In 2018, Pagenaud earned 14 top-10 finishes, highlighted by runner-up results at Texas and Toronto. After a tough start to the season as he adapted to the new universal aero kit car, he rallied to finish sixth in the championship standings.

Pagenaud's favorite activities away from the track include cycling, surfing and skiing. He makes his home in the Charlotte, North Carolina area with his wife Hailey and their dog Norman.