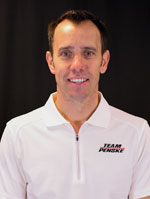 In his 11th season with Team Penske in 2021, Paul Wolfe will look to compete for his second NASCAR Cup Series (NCS) Championship with the No. Shell-Pennzoil/AAA/Autotrader/MoneyLion Ford Mustang team and driver Joey Logano after reaching the Championship 4 last season. Wolfe and Logano enjoyed a very productive first season together in 2020. In addition to earning the opportunity to race for the NCS championship in the final race of the season, the No. 22 Ford Mustang team netted three wins, as Wolfe brought his total to 32 career wins atop a Team Penske pit box. Wolfe's victory mark also places him second among the winningest active crew chiefs in NASCAR's premier series, entering the season.

Wolfe firmly established himself as one of the top crew chiefs in NASCAR when he helped Team Penske secure its first two NASCAR championships - the 2010 Xfinity Series title and the 2012 Cup Series crown, working with driver Brad Keselowski. Since he joined Team Penske in 2010, Wolfe has helped his team's to 35 races wins and 21 pole positions across Xfinity Series and Cup Series competition. Now at the helm of the No. 22 NCS team, Wolfe will have the opportunity to add to those impressive accomplishments in 2021.

Wolfe began his racing career as a driver, starting in go-karts at the age of 11 and competing in various local series until he was 18. Wolfe moved to North Carolina in 1996 and joined Joe Gibbs Racing where he worked in a variety of departments and gaining valuable experience about race cars.

The Milford, N.Y., native returned to the driver's seat in 2000 to compete in the NASCAR K&N Pro Series East. Wolfe made 40 starts over the next five seasons and logged 19 top 10 finishes. In 2003, he graduated to the NASCAR Xfinity Series where he made the first of 16 starts scattered over the next three seasons with a best effort of 10th-place at Nashville Superspeedway in 2005. Wolfe joined Fitz Racing in 2006 as crew chief for the team's NASCAR Camping World Truck Series team and one year later he moved up to the organization's NASCAR Xfinity Series team. After spending 2009 leading CJM Racing in the Xfinity Series, Wolfe joined Team Penske as crew chief for the No. 22 Discount Tire Ford driven by Keselowski.

Under Wolfe's leadership and decision making, the team enjoyed a banner year in 2010, winning Team Penske's first-ever NASCAR championship. Keselowski scored six wins, five poles, and racked up a series-record 26 top-five finishes. That sterling performance earned Wolfe a promotion as he was named crew chief of the No. 2 Cup Series team for the 2011 season. After winning three races and earning a trip to the NASCAR Playoffs in 2011, Wolfe continued his ascension as he led Team Penske to its first Cup Series crown.

In just his second NCS season, Wolfe helped direct the No. 2 team to a series-best five victories in 2012 to go along with 13 top-five, and 23 top-10 finishes. Two clutch victories during the Playoffs at Chicagoland Speedway and Dover International Speedway catapulted the team to the title. Wolfe captured Crew Chief of the Year honors and he became the first chief to win championships in both Cup Series and Xfinity Series competition.

Wolfe's teams have produced at least one race win for the last 10 consecutive seasons. He led the No. 2 team to the Playoffs in nine of his 10 seasons as crew chief, and his teams have finished among the top 10 in the championship standings eight times, earning two trips to the title race (2017, 2020).

This season, Wolfe will look to build on last season's momentum and chemistry with Logano, who earned Team Penske's second Cup Series title in 2018 and has finished inside the top five in the championship standings in five of the last seven seasons.