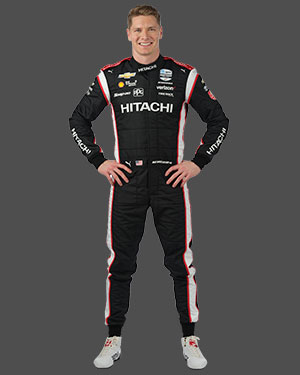 Since joining Team Penske prior to the 2017 NTT INDYCAR SERIES season, Josef Newgarden has emerged as one of the true stars of INDYCAR, producing on the track and helping to attract new fans to the sport. Newgarden's skills and hard work have produced series titles in both 2017 and 2019, along with 20 career victories that make him the winningest active American driver in INDYCAR competition. After earning two wins and a second consecutive championship runner-up finish behind the wheel of the No. 2 Hitachi/XPEL/Shell Fuel Rewards/Sonsio/Snap-on Dallara/Chevrolet in 2021, Newgarden will strive to secure his third INDYCAR title in 2022.

After a difficult start to the 2021 season that saw Newgarden finish 23rd in the season opener at Barber Motorsports Park following an incident on the first lap of racing, the Hendersonville, Tenn., native rallied to remain in championship contention all the way through the checkered flag in the season finale on the streets of Long Beach. While he ultimately finished second in the series standings, Newgarden produced his third-consecutive top-two championship finish and he has either won the INDYCAR title or emerged as series runner up four times in the last five seasons.

The results for Newgarden were remarkably consistent over the course of the 2021 season, beyond two rare finishes outside of the top 20. His two victories in the No. 2 Dallara/Chevrolet - at the Mid-Ohio Sports Car Course and World Wide Technology Raceway - paired nicely with his series-leading four NTT P1 Pole Awards. Three of the poles won by Newgarden and the team came in succession at Detroit, Road America and Mid-Ohio.

His pursuit of the 2021 NTT INDYCAR SERIES championship followed a pandemic-condensed 2020 season that saw Newgarden capture four wins - including three over the final six races of the year - to go along with three NTT P1 Pole Awards as he once again narrowly missed earning a third career series crown.

Newgarden's success in 2020 followed what may have been the best season of his career. In 2019, he posted four victories, including the season opener at St. Petersburg, the first race of the Detroit doubleheader weekend and oval track triumphs at Texas and Iowa. With seven podium finishes and two poles, Newgarden paved a path to his second series championship as he earned Team Penske's 16th INDYCAR crown.

Early in the 2018 season, it appeared that Newgarden might be on his way to titles in his first two seasons with Team Penske. He got off to a strong start with wins at two of the first four races - at Phoenix and Barber Motorsports Park. Following a tough stretch in the middle of the season, Newgarden returned to Victory Lane at Road America in July. He closed the year with eight consecutive top-10 finishes and wound up fifth in the championship standings to complete a strong sophomore season with Team Penske.

After joining Team Penske shortly after the completion of the 2016 season, it didn't take long for Newgarden to make his mark in the record books of the winningest team in the history of North American open-wheel racing. Newgarden found his way to Victory Lane early in the 2017 INDYCAR SERIES season with a win at Barber Motorsports Park in just his third start for Team Penske. He drove the No. 2 Chevrolet to the winner's circle three more times - at Toronto, Mid-Ohio and Gateway - over the course of the season to lead all series drivers with four wins. He posted 10 top-five and 13 top-10 finishes while leading at least one lap in a series-best 12 races on his way to winning his first career NTT INDYCAR SERIES championship and Team Penske's 15th title in open-wheel racing.

By claiming the INDYCAR crown in his first season with Team Penske, Newgarden joined some elite company. Rick Mears, Al Unser Sr., Al Unser Jr., and Gil de Ferran are the only other drivers to accomplish that feat in the team's storied history. Winning the title at age 26, Newgarden also became the youngest series champion since Scott Dixon won it at 23 in 2003, and he was the first American-born driver to claim the championship since Ryan Hunter-Reay in 2012.

Newgarden began his racing career when he was 13 years-old at New Castle (Ind.) Motorsports Park, where he won numerous karting titles between 2006-2008. After racing in Europe for a few years, he returned to the United States in 2011 and captured the Indy Lights championship for Sam Schmidt Motorsports, as he posted five wins and 10 podium finishes in 14 starts. The performance earned Newgarden an opportunity at Sarah Fisher Hartman Racing for the 2012 INDYCAR SERIES season.

After scoring his first two career INDYCAR SERIES wins in 2015, Newgarden produced one of the most dominating victories in series history while driving for Ed Carpenter Racing during the 2016 season. He led a series-record 282 of 300 laps after starting second on his way to victory at Iowa Speedway. Adding to the impressive performance was the fact that the race came just four weeks after Newgarden suffered a fractured clavicle and right hand in a dramatic accident at Texas Motor Speedway. Overall in 2016, Newgarden recorded six top-five and 11 top-10 results as he finished fourth in the championship standings, just behind the three Team Penske drivers that would become his teammates later that year - Simon Pagenaud, Will Power and Helio Castroneves.

As he begins his 11th season in the series in 2022, Newgarden hopes to guide the No. 2 Hitachi Chevy team to another NTT INDYCAR SERIES title and his first Indianapolis 500 victory. A former high school baseball player who loves to play ping pong when he's away from the track, Newgarden and his wife Ashley reside in Nashville, Tenn.