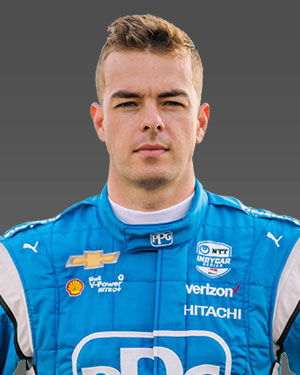 One of the most accomplished racers in the history of Australian Supercars, Scott McLaughlin is excited for a new challenge in 2021 as he transitions to racing in the U.S. and competing for NTT INDYCAR SERIES Rookie of the Year honors this season. After earning his third consecutive Supercars Championship in 2020, McLaughlin made his NTT INDYCAR SERIES debut when he joined Team Penske for the season finale on the streets of St. Petersburg in November. Shifting gears to compete in his first full season of open-wheel racing, McLaughlin will drive the No. 3 PPG Dallara/Chevrolet for Team Penske in 2021.

During his four seasons competing for the DJR Team Penske (DJRTP) Supercars team, McLaughlin became one of Australia's most popular and accomplished racing stars. He produced wins, poles and championships at a record-setting pace for DJRTP. He earned 48 victories and 59 poles for the team while winning three driver's titles and helping DJRTP secure three team championships.

The 27-year-old native of Christchurch, New Zealand enters 2021 ranked third on Team Penske's all-time wins list, trailing only Brad Keselowski (66 wins) and Mark Donohue (59 wins). He begins the season ranked second on the team's all-time poles list, just one behind Helio Castroneves (60). Over the course of his nine-year Supercars career, McLaughlin recorded 56 race wins, 106 podium finishes and 76 poles. He hopes to bring that same success to his new position with Team Penske in the NTT INDYCAR SERIES.

On the way to his third consecutive Supercars championship with DJRTP, McLaughlin scored a series-best 13 wins and 15 poles in 2020. He paced the series in virtually every key statistical category on his way to another dominant season driving the No. 17 Shell V-Power Ford.

The 2019 season may have been McLaughlin's best year in terms of results on track. He produced a Supercars series single-season record 18 victories to go along with 15 poles and 22 podium finishes as he secured his second-consecutive driver's title. McLaughlin also earned his first career win in the legendary Bathurst 1000 race as he and co-driver Alex Premat won from the pole for Team Penske's first-ever victory in the Supercars endurance classic.

McLaughlin secured his first Supercars driver's title in 2018 as he won nine races and 13 poles while posting 21 podium finishes. With a strong performance under the intense glare of a championship weekend in Newcastle, McLaughlin earned a win and a runner-up result to clinch the championship.

The fast Kiwi joined DJR Team Penske for the 2017 season, as he teamed up with Fabian Coulthard to form one of the most exciting combinations in Supercars competition. McLaughlin had an incredible first season with DJRTP as he scored eight wins and a record-breaking 16 pole positions on his way to finishing second in the 2017 driver's championship.

Before he began his journey with Team Penske, McLaughlin carved an interesting path to the top of the motorsports mountain. He made his racing debut at age eight, progressing through the New Zealand and Australian Karting scenes before he earned a test in a Stone Brothers Racing Supercar. The Stone Brothers saw potential in the young McLaughlin and made the decision to promote him straight into the 2010 Supercars Dunlop development series at just 16 years of age.

The 2012 season was a breakout year for McLaughlin as he competed in – and won – both the Supercars Dunlop Series in Australia and the New Zealand V8 Super Tourer series. He also made his Supercars Championship debut the same year, partnering with Jonathon Webb at Tekno in both the Sandown 500 and Bathurst 1000. At the 2012 Sydney 500, McLaughlin made the most of an opportunity as he stepped in for the ill Alex Premat at Garry Rogers Motorsport (GRM) for the final Supercars Championship race of the season. McLaughlin finished in 17th place after starting at the rear of the field and the performance earned the talented young racer a full-time drive at GRM for the 2013 season.

McLaughlin became the youngest-ever winner of a Supercars Championship race when he triumphed at Pukekohe Park Raceway in front of an adoring home crowd in 2013.  He closed that season ranked 10th in the series standings and captured the prestigious Mike Kable Young Gun Award that recognizes the achievement of a top rookie racer.

Over four seasons competing for GRM, McLaughlin produced eight victories and 17 poles as he finished inside the top 10 in the championship standings each year. The promise and performance he showed at GRM as a consistent winner and title contender led to the opportunity to join Team Penske.

McLaughlin relocated to the U.S. last fall after he joined the Team Penske INDYCAR program and he has acclimated quickly to life in the states. He resides in Charlotte, N.C. with his wife Karly and he has adopted the Carolina Panthers as his favorite NFL team. McLaughlin also continues to root for New Zealand's All Blacks rugby team.