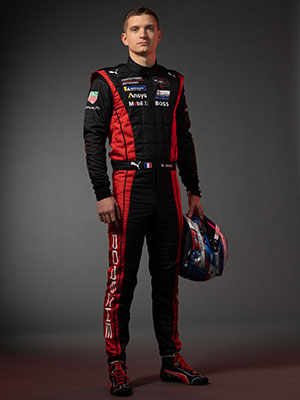 Jaminet is coming off his most successful season competing in IMSA as he posted four class wins and finished second in the GTP class standings while racing a Porsche 911 GT3 R for Pfaff Motorsports in 2022. Competing with current PPM teammates Felipe Nasr and Matt Campbell, the Frenchman posted his first victory at the Rolex 24 Hours in Daytona before he and Campbell also secured victories at Laguna Seca, Canadian Tire Motorsports Park and at Lime Rock Park.

After consistently solid performances in the junior formulas in Europe, Jaminet was named a Porsche Works driver in 2017. Over the last five years, Jaminet has been competing with the 911 GT3 R, most notably in the IMSA WeatherTech SportsCar Championship and the ADAC GT Masters Series.

In 2018, Jaminet joined forces with Porsche works drivers Earl Bamber and Laurens Vanthoor to contest Petit Le Mans at Road Atlanta. For the 2019 season, the trio remained together to compete in the North American Endurance Cup (NAEC) for the IMSA races at Daytona, Sebring, Watkins Glen and Road Atlanta. Following a class podium finish in the Rolex 24 at Daytona and his debut in the 24 Hours of Le Mans in 2019, Jaminet and current PPM teammate Nick Tandy teamed up to produce an Intercontinental GT Challenge victory at the nine-hour race at Kyalami in South Africa in a Porsche 911 GT3 R.

In 2021, the Frenchman won the GTLM class at the IMSA endurance classics in Sebring and at Road Atlanta. Last season, in addition to his four IMSA WeatherTech SportsCar Championship wins, Jaminet also helped secure three pole positions on his way to a runner-up championship effort in the GTLM class.

In 2023, Jaminet hopes to continue his sports car success with the No. 6 team and the Porsche 963 hybrid Prototype competing in the new GTP class of the IMSA WeatherTech SportsCar Championship.