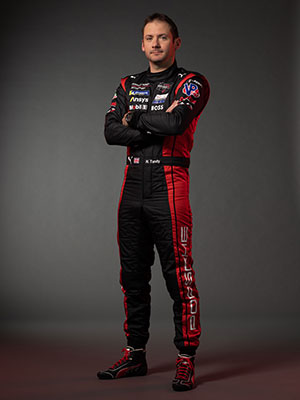 Nick Tandy returns to Porsche in 2023 and the accomplished sports car driver will drive the No. 6 Porsche Penske Motorsport LMDh entry in the IMSA WeatherTech SportsCar Championship, alongside co-driver Mathieu Jaminet. With 19 sports car victories in the U.S. since 2012, Tandy has consistently proven he knows his way to Victory Lane.

After two seasons competing with Corvette Racing in both the World Endurance Championship (WEC) and IMSA, Tandy returns as a Porsche works driver this season. Tandy has produced some impressive results with Porsche, including wins in the 24 Hours of Le Mans, the Rolex 24 at Daytona, the 12 Hours of Sebring and at Petit Le Mans.

Tandy began his partnership with Porsche in 2011 when he claimed the Porsche Carrera Cup title in Germany. In 2012, he won the prestigious Porsche Cup as the most successful driver worldwide competing in a 911.

In 2013, Tandy joined the circle of Porsche works drivers. He began to produce immediate success in long-distance events as he won Petit Le Mans that season in a 911 GT3 RSR. Tandy then posted a class victory in a 911 RSR in 2014 at the Rolex 24 at Daytona.

When Porsche provided the opportunity for some of its GT drivers to test the 919 race car, Tandy turned in a convincing performance. He helped Porsche earn the overall victory in the 2015 24 Hours of Le Mans racing the 919 hybrid. Following the impressive performance in France, Tandy produced another significant endurance victory. In adverse weather conditions and up against stronger prototypes, he scored the first overall victory for Porsche at the 2015 Petit Le Mans in the 911 RSR.

After winning the IMSA WeatherTech SportsCar Championship race at Long Beach in 2016, Tandy enjoyed several more successful endurance wins in 2018 with victories at Sebring, the Nürburgring and Road Atlanta. He added a third career win at the 12 Hours of Sebring in 2020 and at the 20 Hours of Spa later that season.

In 2021, Tandy posted four IMSA WeatherTech SportsCar Championship wins and in 2022, he finished sixth in the WEC LMGTE Pro standings, highlighted by a win in the 6 Hours of Monza.

With a full-season effort in the IMSA WeatherTech SportsCar Championship this season as he joins Porsche Penske Motorsport, Tandy will look to add to career accomplishments in 2023.