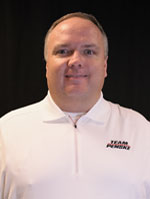 Jeremy Bullins is proof that sometimes change is a good thing.

Prior to the beginning of the 2020 NASCAR Cup Series (NSC) season, Bullins and his crew transitioned from Team Penske's No. 12 NCS team to the No. 2 Ford Mustang driven by 2012 Cup Series champion Brad Keselowski. The move paid off handsomely for Keselowski and Bullins and the duo plan to build on their success in 2021 with the No. 2 Discount Tire/Wurth/Freightliner/Autotrader/Wabash/Snap-on/MoneyLion/PIRTEK/Dent Wizard/Keystone Light Ford team.

Together, Bullins and Keselowski won four races in 2020, including the Coca-Cola 600, and finished a close second in the series championship standings. Bullins, a native of Walnut Cove, N.C., is now in his 10th season with Team Penske and his sixth as a crew chief in NASCAR's premier division. Bullins enters the year with seven career wins at the Cup Series level and has claimed at least one victory in each of the past four consecutive seasons.

Bullins helped Keselowski put together one of the best seasons of his NASCAR career in 2020. The veteran racer qualified for the Championship 4, to mark the second time he raced for a Cup Series title since the elimination format debuted in 2014. As the No. 2 Ford Mustang team finished second in the NCS championship standings, it marked Keselowski's best season result since winning the title in 2012.

The move to the No. 2 team for Bullins came after a strong 2019 season that saw the No. 12 team score a dramatic NCS Playoff win at Talladega Superspeedway with driver Ryan Blaney. The Bullins-led team advanced to the Round of 8 in the NCS Playoffs before it finished seventh in the final series standings.

Growing up in North Carolina, racing was a constant presence to Bullins. His father worked on dirt late model cars in Piedmont Triad area and Bullins began accompanying his dad to the race shop and 311 Speedway in Madison, N.C., when he was just five years old. As he grew older, Bullins expanded his racing acumen to include World Karting Association go-karts and asphalt late models until he graduated from South Stokes High School in 1995. Bullins then enrolled at North Carolina State University where he earned a mechanical engineering degree.

After college, Bullins joined the historic Wood Brothers Racing team in October 1999 for his first position in the Cup Series. After working with ST Motorsports in the NASCAR Xfinity Series (NXS) and then at Robert Yates Racing, Bullins joined Richard Childress Racing (RCR) in January 2005. He helped produce nine Cup Series wins with drivers Kevin Harvick and Clint Bowyer over seven seasons as a race engineer at RCR.

Bullins joined Team Penske in 2012 to lead the organization's No. 22 NXS team. The team hit its stride midway through the season as Keselowski scored three wins, including the inaugural Indy 250 at the Indianapolis Motor Speedway. In 2013, Bullins led the No. 22 team through an historic season, winning 12 races with drivers Keselowski, Blaney, Joey Logano, and AJ Allmendinger. Bullins and the team captured the NXS Owner title in fine style, racking up 20 top-five finishes, 25 top-10 results and three poles.

Bullins and the No. 22 team won their second consecutive NXS Owner championship in 2014 on the strength of six wins (five by Keselowski and one with Blaney). Bullins also served as crew chief for Blaney's first two NCS starts at Kansas Speedway and Talladega Superspeedway.

In 2015, Team Penske and Wood Brothers Racing formed a technical alliance. Blaney was tapped as driver for the team's partial schedule with Bullins rejoining the team as crew chief. The Wood Brothers expanded to a full-season Cup Series program in 2016 as Blaney finished as runner-up in the Sunoco Rookie of the Year standings.

Bullins and Blaney enjoyed a breakout season in 2017 culminating with the best season finish since 1995 for NASCAR's oldest running team. Blaney captured his first career NCS victory with a thrilling win at Pocono Raceway for the Wood Brothers 99th all-time win. The victory earned the team a spot in the NASCAR Playoffs and they finished ninth in the final standings.

Bullins transitioned back to Team Penske in 2018 as the organization fielded a third full-season NCS car with Blaney. The team won the inaugural Bank of America ROVAL 400 at Charlotte Motor Speedway, which allowed the team to advance to the Round of 12 in the NASCAR Playoffs. Blaney eventually finished 10th in the NCS standings, setting the stage for another impressive run in 2019.