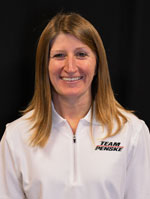 Andrea Mueller enters the 2021 NASCAR Cup Series season riding momentum from the most successful year of her career.

Mueller was an important part of the No. 2 Ford Mustang team that won four races and finished second in the NCS championship standings in 2020 with driver Brad Keselowski. The 2021 season marks Mueller's 15th season with Team Penske and her fourth as a race engineer for the organization. This season, Mueller is in her second season working with Keselowski and crew chief Jeremy Bullins at the Cup Series level and the Fresno, Calif., native hopes to help bring a second Cup Series title to the No. 2 Discount Tire/Wurth/Freightliner/Autotrader/Wabash/Snap-on/MoneyLion/PIRTEK/Dent Wizard/Keytone Light Ford team.

Before she, Mullins and the rest of their crew transitioned to the No. 2 team before the 2020 season, Mueller helped Ryan Blaney produce his third consecutive season with an NCS victory in 2019. Blaney won in a thrilling photo finish at Talladega Superspeedway that season and the victory propelled the No. 12 Ford team into the Round of 8 in the NASCAR Playoffs. Blaney finished the season a career-best seventh in the final championship standings. The tandem of Bullins and Mueller also helped the young driver establish personal bests in top-five (11) and top-10 finishes (18).

Mueller grew up in a racing family, which took her to the racetrack at a young age. Her father was an engine tuner for Silver Crown cars and after spending many of her formative years at the track, Mueller decided it was time to try her hand behind the wheel. From ages 10-18, she forged a successful career in the quarter-midget and micro-midget divisions at such tracks as King's Speedway in Hanford, Calif., and Madera (Calif.) Speedway, winning several track and series titles along the way. Her No. 14 entry was a nod to her racing hero, A.J. Foyt.

Following high school graduation, Mueller enrolled at the renowned California Polytechnic State University where she earned a mechanical engineering degree in June 2003. She stepped away from motorsports after college and began working at Pratt & Whitney, Inc. Rocketdyne Propulsion and Power. While there, she assisted in the design and development of the main engine nozzle for the space shuttle from August 2003 to January 2007.

While working on the shuttle program could only be described as a once-in-a-lifetime opportunity, Mueller still dreamed of a career in motorsports. In 2008, she joined Team Penske, one of the most successful sports organizations in the world. While working with the team, Mueller has implemented and organized a weight savings program that significantly reduced the weight of the cars, along with improving radio equipment for all teams. She has also operated and maintained many of the essential data acquisition programs that are standard in today's high-tech world of stock car racing.

In her first year as an engineer working with Bullins on the No. 22 NASCAR Xfinity Series (NXS) team in 2013, Mueller helped guide Keselowski, Blaney and others to three wins. One year later, the No. 22 team put up record-setting numbers with 12 victories among four different drivers, including Keselowski (six wins), Joey Logano (three wins), AJ Allmendinger (two wins) and Blaney (one win) as the team captured the NXS Owner championship.

Led by Keselowski's five victories and one with Blaney, the No. 22 team earned its second consecutive NXS Owner title in 2014.

Mueller and the No. 22 team featured a new crew chief in 2015 but the winning continued as four drivers generated seven victories en route to capturing their third consecutive NXS Owner championship.

Mueller reunited with Bullins at Wood Brothers Racing in 2017. The Team Penske technical alliance partner team scored its 99th all-time victory as Blaney posted his first-ever NCS win at Pocono Raceway. After advancing to the Round of 8 in the Playoffs, Blaney finished ninth in the final championship standings.

In 2018, Mueller transitioned back to Team Penske as the organization fielded a third full-season NCS car with Blaney at the wheel. Mueller helped Blaney and the No. 12 team win the inaugural Bank of America ROVAL 400 at Charlotte Motor Speedway, and Blaney finished 10th in the ‘18 series standings after another solid performance in the Playoffs.