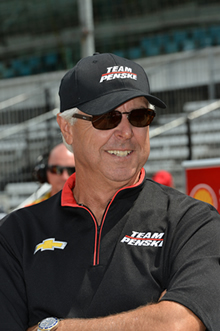 Among hs most significant accomplishments in IndyCar racing:

He was the first Indy car driver to earn $10 million.

With his leadership and track record of success, Mears continues to inspire current and future stars, including Team Penske drivers Will Power, Josef Newgarden,  Simon Pagenaud and Scott McLaughlin. Mears works with all four drivers in his role as an advisor to Team Penske.

"It's just a huge asset for all of us to have Rick as someone we can lean on, no matter how long we have been racing in Indy car," said Newgarden. "There is always something to learn, particularly at Indianapolis, and there is no better man to have in your corner at Indy than Rick Mears."

During the years, Mears' accomplishments have been recognized and honored by a variety of organizations. In 1990, he was named the Associated Press' "Driver of the Decade" for his 20 wins in the 1980s. In 1992, he was named one of 10 "Champions for Life" by the Driver of the Year Award panel. The Champions represented the best INDYCAR, NASCAR and NHRA drivers, and Mears was the youngest driver to be honored.

In 1997, Mears was inducted into the International Motorsports Hall of Fame. In 1999, he was ranked seventh among American racers of the 20th century as nominated by ESPN's motorsports writers and producers. In 2004, Mears received the Eagle One-Shav Glick Award, named in honor of Glick, the longtime Los Angeles Times motorsports writer. The award recognizes distinguished achievement in motor racing by a Californian. Also in 2004, Mears was included in the Top-50 Newsmakers of the Half Century by the American Auto Racing Writers and Broadcasters Association.

During the past 25 plus seasons, Mears has helped Team Penske's drivers and engineers earn 144 victories, including 10 Indianapolis 500 wins, 144 poles and seven IndyCar Championships.

Mears began competing in desert motorcycle events in California as a teenager. To please his mother, Rick traded in his dirt bike for a less risky dune buggy built by his father, former racer Bill Mears. By 1972, Rick and brother Roger were leading contenders in the off-road vehicle class in events across the southwest United States.

In the fall of 1977, Roger Penske met Mears and offered him a ride in the Penske car usually driven by Mario Andretti. When Andretti missed a few races with Team Penske to compete in Formula One events, Mears stepped in for the legendary racer. The 1978 season marked Mears' first year with Penske. That year, Mears started on the outside of the front row at Indianapolis, was named co-rookie of the year of the race and won races at Milwaukee, Atlanta and Brands Hatch, England.

In 1979, Mears started from the pole and posted his first Indy 500 win in just his second start at the Indianapolis Motor Speedway, as he became became just the 10th driver to win from the pole. He finished each of the season's 14 races in the top-10 and go on to win the PPG Indy Car World Series Championship. Mears won his second and third PPG Indy Car World Series titles in 1981 and 1982, scoring 10 victories, eight poles and 18 top-five finishes in just two years. In 1983, Mears earned the Triple Crown award for best combined finishes in CART's 500-mile races: the Indy 500 (third), Michigan (fourth) and Pocono (third).

In 1984, Mears scored his second Indy 500 win, giving him his second straight Triple Crown award. Later that season, at Sanair Super Speedway near Montreal, Mears crashed into a guardrail during a practice session and severely injured both feet, ending his season early. After several operations and months of rehabilitation, Mears was back racing in the 1985 season. He raced in just five oval events that season and finished in the top three in three of them, including a win at Pocono. The next season, Mears would set the World Closed Course Speed Record in Michigan with a lap of 233.401 mph.

In 1991, Mears claimed his fourth Indy 500, winning after earning his record sixth pole at the Brickyard. His victory tied him with racing legends Al Unser Sr. and A.J. Foyt as the winningest drivers at the Speedway. At 39, Mears was the youngest driver to accomplish the feat, as well as the only driver to win three times from the pole. He also needed just 14 races to reach four Indy 500 wins, the shortest span in history.

Despite retiring from on-track competition in 1992, Mears has continued to lend his expertise to all the drivers that have competed under the Team Penske banner, making him one of the longest-tenured and most respected team members in the organization’s history.