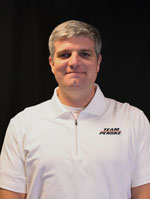 Jonathan Diuguid has been a part of many memorable Team Penske achievements since he joined the organization in 2007 - both in the NTT INDYCAR SERIES (NICS) and in IMSA sports car competition.  in 2021, he will return to the INDYCAR SERIES with rookie Scott McLaughlin as race engineer on the No. 3 Team Penske Dallara/Chevrolet.

His history with the team and his track record of success made Diuguid the perfect choice to lead the engineering efforts for the Acura Team Penske ARX-05 Daytona Prototype International (DPi) entries in the IMSA WeatherTech SportsCar Championship. It paid off in two short seasons when Dane Cameron and Juan Pablo Montoya captured the first IMSA title for Acura Team Penske in 2019, and the 11th sports car championship in team history.

Under Diuguid's guidance, Acura Team Penske enjoyed a solid freshman season in the IMSA WeatherTech SportsCar Championship in 2018 with one win, six podium finishes, three pole positions and 620 laps led between the No. 6 and No. 7 Acura Team Penske Prototype entries. That season laid the groundwork for the championship run in year two as Cameron and Montoya picked up three wins and seven consecutive podium finishes in a dominant campaign.

Prior to his role with Acura Team Penske, Diuguid served as the NICS race engineer for three-time Indianapolis 500 winner Helio Castroneves from 2013-2016. During that time, the duo earned three wins, 19 podium efforts and four consecutive top-five finishes in the final championship standings, including two runner-up results.

Hailing from Raleigh, North Carolina, Diuguid picked up an interest in racing at an early age. He competed in Formula SAE as the Team Captain while at North Carolina State University and came to Team Penske right out of college in 2005. Since that time, he has worked in numerous roles for Team Penske, helping the organization surpass the 500-win plateau in 2018.

Diuguid was one of the first employees hired to develop and compete with the Championship-winning Penske Porsche LMP2 car in the American Le Mans Series (ALMS). During his tenure with the Porsche program, Diuguid had a wide range of responsibilities including designing parts, fuel cell development, race fuel strategy and assistant race engineer.

In 2007, Diuguid and former Team Penske driver, Ryan Briscoe, worked together on the No. 6 DHL Penske/Porsche, as Diuguid helped guide Briscoe and Sascha Maassen to three LMP2 class victories and a third-place finish in the final ALMS standings. Diuguid and Castroneves worked together for the first time in 2008 when the Brazilian racer and Briscoe teamed up to drive the Penske Porsche in the Petit Le Mans at Road Atlanta, where they produced the overall win and the 24th LMP2 victory for Team Penske.

At the conclusion of the Penske Porsche ALMS program in 2008, Diuguid engineered the Team Penske Grand-Am Series prototype program in 2009 and then he transitioned to the team's NTT IndyCar Series program in 2010. There he reunited with Briscoe on the No. 6 Team Penske entry, first as a data acquisition engineer from 2010-2011, then as race engineer in 2012.

As Team Penske transitioned to two cars in 2013, Diuguid moved to the timing stand of the No. 3 Chevrolet driven by Castroneves. The two became one of the best driver/engineer combinations in the NICS and Diuguid has brought that same level of focus, intensity and success to the IMSA WeatherTech SportsCar Championship team of Montoya, Cameron and Pagenaud.

Diuguid, his wife Katherine and son Zay, reside in Troutman, NC with their dogs Jensen and Dolly. In his spare time Diuguid enjoys slalom skiing, snow skiing and mountain biking.