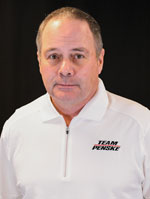 Kyle Moyer has a diverse motorsports background with more than 30 years experience in the industry and he is in his seventh season with Team Penske in 2021. In 2019, Moyer moved into the role of the General Manager for Team Penske’s IndyCar program. In addition to overseeing the winningest program in the history of American open-wheel racing, Moyer also serves as the race strategist for Team Penske’s No. 22 Dallara/Chevrolet driven by Simon Pagenaud in the NTT IndyCar Series.

Moyer joined Team Penske just prior to the 2015 INDYCAR SERIES season. Since he came on board, Team Penske has won the Indianapolis 500 three times – in 2015 with Juan Pablo Montoya, in 2018 with Will Power and last season with Pagenaud and Moyer teaming up to capture the organization's 18th victory at Indy. The team has also produced three championships since Moyer joined its ranks with Pagenaud winning the title in 2016 and Josef Newgarden capturing the crown in both 2017 and 2019.

Prior to joining Team Penske, Moyer served as the Director of Operations at Andretti Autosport, where he oversaw the team’s IndyCar program. Moyer worked with the Andretti team for more than 20 years, servings as a driving force behind multiple Indianapolis 500 wins (including victories for Dan Wheldon, Dario Franchitti and Ryan Hunter-Reay) and series championships (withs title runs for Tony Kanaan, Wheldon and Franchitti).

Before he joined the Andretti organization, Moyer worked at Forsythe-Green Racing (which would eventually become Andretti Autosport). In 1995, he enjoyed a breakout year with driver Jacques Villenueve serving as his crew chief while they captured the Indianapolis 500 and the CART Series championship.

While working at Galles-Kraco Racing from 1989-1992, Moyer was part of the first of many Indianapolis 500 wins during the course of his career. Moyer worked with Al Unser Jr., as he claimed the win at Indianapolis in 1992.

Moyer began his career in motorsports at Gary Bettenhausen’s race shop in Monrovia, Ind. and he did everything at the shop ranging from sweeping the shop floor to working on Bettenhausen’s sprint car. From 1980-1983, Moyer served on the pit crew for Bettenhausen’s late brother, Tony Bettenhausen, and he almost missed his high school graduation as he helped Gary Bettenhausen qualify a Lindsey Hopkins car for the Indianapolis 500.

Moyer and his wife Tracy currently resides in Mooresville, N.C.