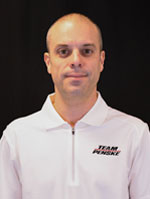 As he enters his 14th season as race engineer for Will Power and the No. 12 Verizon 5G Team Penske Dallara/Chevrolet in 2023, David Faustino has become one of the most successful race engineers in the NTT INDYCAR SERIES. After producing 37 victories, 60 pole awards, a memorable win in the 2018 Indianapolis 500 and two series championships (2014, 2022) over the last 13 seasons, Faustino has accomplished quite a bit during his time with Power and the team. One of the duos biggest accomplishments came in the 2022 season finale at Laguna Seca when Power passed Mario Andretti as the all-time leader in series pole positions with his 68th NTT P1 Award.

Faustino and Power have developed a strong bond over the years. The duo earned the Mario Andretti Road Course Championship in three consecutive seasons from 2011-2013 with Team Penske. They previously worked together from 2007-2008, first with Walker Racing in 2007 where they captured the Grand Prix of Las Vegas for Power's first career series win, before both moving to KV Racing Technology (KVRT) in 2008. While at KVRT the tandem won the prestigious Grand Prix of Long Beach in 2008.

Over the past 17 years, Faustino has steadily built an impressive career in motorsports. Early in his career, he worked almost exclusively with rookie drivers – including Power – before settling in with the fast Australian racer at Team Penske.

Faustino served as an engineer at Conquest Racing during the 2005 and 2006 seasons as he helped produce the first ever Champ Car podium finish for the team and then-rookie driver Andrew Ranger.

Faustino began his professional racing career as one of the original employees of the start-up racing team, Sierra Sierra Enterprises. He spent four years with Sierra Sierra working first with the team's Formula Mazda operation and then in its winning Atlantic Series program.

During his college years at Rutgers University, Faustino was involved with the school's Formula SAE team as he designed and built race cars for collegiate competition. Faustino graduated with honors from Rutgers University with a Bachelor's of Science in Mechanical Engineering.

Faustino, his wife Alison and their daughters Nora and Grace currently live in Mooresville, NC.