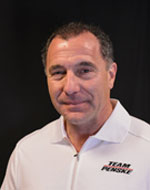 Since he joined Team Penske in 2005, Ron Ruzewski has made a significant impact on the organization’s programs that compete in the NTT IndyCar Series.

Prior to the 2019 season, Ruzewski became Managing Director after serving as the team's Technical Director. Now in his 17th season with Team Penske in 2021, Ruzewski oversees the technical development and day to day management of the teams racing in the INDYCAR SERIES, working closely with the engineering leads, as well as general manager Kyle Moyer. Ruzewski also spent more than a decade as race engineer for Team Penske drivers.  This primarily included Helio Castroneves and the No. 3 Team Penske Dallara/Chevrolet. The pairing won numerous poles and victories – including Castroneves’ third Indianapolis 500 win in 2009.

Ruzewski joined Team Penske at the start of the 2005 season, as he focused specifically on vehicle dynamics development. He then joined Castroneves' engineering team in July 2005 and he has continued to raise the level of competition throughout the organization ever since.

Prior to joining Team Penske, Ruzewski worked at the Yamaha Motor Corporation as Department Manager of Advance Development for the Snowmobile Group from 1996-2005. While at Yamaha, he managed current and future development projects, including design, development and field testing of new products and prototypes. Ruzewski was instrumental in the introduction of numerous models including two which were named "Snowmobile of the Year" as decided by Industry Press magazines.

Ruzewski's racing background includes a position as Data Acquisition Engineer for Walker Racing from 1992-1996, where he worked primarily with Scott Goodyear and Robby Gordon. During his time with the team, Walker Racing scored three wins and six poles. Ruzewski also worked at Shierson Racing from 1990-1992 as a Data Acquisition Engineer for Scott Goodyear.

He graduated from Purdue University with a Bachelor of Science in Industrial Engineering.

Ruzewski and wife Kim have two daughters - Taylor and Kenzie.