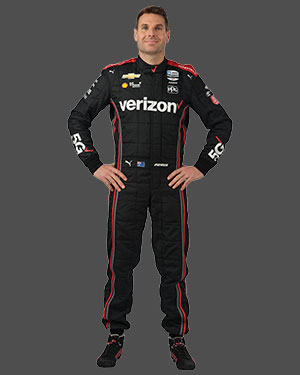 Competing in his 18th NTT INDYCAR SERIES season in 2022, Will Power has secured his position among the all-time greats in North America's premier open-wheel racing series. His 40 career wins and 63 career pole positions rank fifth and second, respectively, in the series record books. Power also ranks inside the top-10 all-time in most laps led among INDYCAR drivers, entering the 2022 season. As he continues his high level of production now in his 14th season competing for Team Penske, Power aims for a record-breaking year behind the wheel of the No. 12 Verizon 5G Dallara/Chevrolet.

Entering 2022, Power has produced an incredible run of 15 consecutive seasons with at least one INDYCAR SERIES victory. He extended the impressive streak thanks to a dominant win in the fall race on the Indianapolis Motor Speedway (IMS) Road Course in August of 2021. His NTT P1 Pole Award won at World Wide Technology Raceway the following weekend extended his streak to 13 consecutive seasons of producing at least one pole position and he enters the year just four poles away from tying Mario Andretti for the all-time INDYCAR record. After earning four podium results - including the win on the IMS road course - Power finished ninth in the championship pursuit last season to mark his 12th consecutive year ranking inside the top 10 in the final series standings.

The 40-year-old Power has showed no signs of slowing down. He and the No. 12 Verizon Chevrolet team continue to consistently run among the fastest cars in the deep and competitive INDYCAR field. Power's combination of raw speed and veteran experience put him in a good position to compete for his second NTT INDYCAR SERIES championship and second career Indianapolis 500 victory in 2022.

Overcoming the challenges of a 2020 season that was impacted by the global COVID-19 pandemic, Power and the No. 12 team claimed seven top-10 finishes and five podium results to end the year ranked fifth in the series standings. It marked the 11th consecutive year that Power produced a top-five championship season. Power posted wins during doubleheader weekends at Mid-Ohio and in the Harvest Grand Prix at the Indianapolis Motor Speedway Road Course.

In 2019, Power and the Verizon Chevrolet team finished fifth in the INDYCAR SERIES standings after generating two wins, three poles and six podium finishes. Power rallied for a late-season championship run by scoring victories at Pocono Raceway and Portland International Raceway to extend his streak of earning at least one win in each season since 2007.

The 2018 season proved to be historic for Power. He captured three wins and four poles to go along with eight top-five and 11 top-10 finishes. He and the No. 12 team swept the Month of May at the Indianapolis Motor Speedway as they won the INDYCAR Grand Prix on the Speedway's Road Course followed by the biggest victory of Power's career at the Indianapolis 500. The win represented Team Penske's 17th victory in the "Greatest Spectacle in Racing" and Power became the first Australian to claim his spot on the legendary Borg-Warner Trophy. Power closed the season ranked third in the final series standings.

Power began his racing career in his native Australia competing in Formula Ford, including a Queensland state championship in 2000 and a runner-up national finish in 2001. He won the Formula Holden championship and placed second in the Australian F3 series in 2002. Power came to the United States in 2006 to compete in the Champ Car World Series and he earned Rookie-of-the-Year honors with Team Australia. He scored his first career INDYCAR win on the streets of Las Vegas in 2007.

Power joined Team Penske in 2009 - initially filling in for Helio Castroneves - and he collected his first victory for the team that season at Edmonton. Injuries suffered in a practice accident at Sonoma Raceway brought an early end to his first season with the team, but Power returned to compete for a full season with Team Penske in 2010 and he has been winning ever since.

After finishing as series runner up for three consecutive seasons, Power captured the 2014 INDYCAR SERIES championship behind three victories, seven podium finishes and four pole positions. With the title-winning performance, Power became the first Australian driver to win the INDYCAR crown and the first to win a major motorsports championship since 1980 when Alan Jones captured the F1 title.

Power and his wife, Elizabeth, reside in Charlotte, North Carolina with their young son Beau. Power is an avid fitness enthusiast and amateur drummer. In recent years, the native of Toowoomba, Australia has built on his love of go-kart racing to develop his own line of karting chassis in conjunction with Kart Republic.