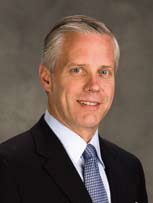 Denker also serves as Chairman of the Chevrolet Detroit Grand Prix, which generates over $50 million in total spending annually in the metro Detroit region, while showcasing the city to a worldwide audience and providing needed improvements to Belle Isle Park.

Throughout Denker's business career, he has been deeply involved in leading the efforts to support his community at the local, city and state levels.

Denker remains engaged in many Detroit-based organizations including the Downtown Detroit Partnership and the Belle Isle Park Advisory Committee, and he serves on the executive boards of The Parade Company and Detroit Regional Chamber of Commerce.