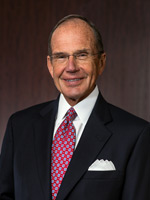 Walter P. Czarnecki is Executive Vice President, a member of the Executive Committee and a Director of Penske Corporation. In addition to his other corporate management responsibilities, he serves as Vice Chairman of Team Penske.

After completing his studies at Wayne State University, he began his business career with a Detroit-based advertising agency before joining Hurst-Campbell, Inc., an automobile accessory firm, in 1966. Czarnecki joined American Motors Corporation in 1968 where he directed that firm's participation in a variety of retail and dealer-oriented automotive marketing programs, including its professional motorsports activities.

Czarnecki became associated with Penske Corporation in 1970 after working with the firm as part of his American Motors duties. His first responsibility was to build and operate a Chevrolet dealership in Southfield, Michigan. Czarnecki was General Manager there until 1975 when he purchased the company.

During his ownership tenure, the agency ranked among the nation's top volume Chevrolet retail sales and customer service dealerships. It was during this time as well that Penske Corporation purchased Michigan International Speedway where he served as its President. In subsequent years, he was President of Penske Speedways which owned five major racing facilities in the U.S. Penske Speedways became a publicly traded company in 1996 and he was its Vice Chairman.

Czarnecki sold the dealership in 1978 to rejoin Penske Corporation full time as it expanded its national presence in the energy and on-highway transportation industries. He managed the company's Detroit Diesel engine and Allison industrial gas turbine distributorship subsidiaries and had responsibility for the firm's on-highway tank/trailer manufacturing and service operations. He was instrumental in the establishment and growth of Penske Corporation's retail automotive and motorsports subsidiaries and still holds senior management positions in both. He is involved in virtually all aspects of Penske Corporation's current transportation services, retail automotive, motorsports and investment interests. He has served as a Director of Detroit Diesel Corp., International Speedway Corp. and Dura Automotive. He currently is on the Board of the National Association of Manufacturers and Business Leaders for Michigan.

Honoring his nearly 50 years with the team, Czarnecki was inducted into the Team Penske Hall of Fame in the summer of 2018. He has served on the Board of Directors of Cornerstone Schools of Detroit and the University of Detroit Jesuit High School and Academy. Czarnecki is also active in numerous local and national charitable organizations.

A Detroit native, Czarnecki is married, with three grown children, and lives with his wife, Ginny, in Bloomfield Hills, Mich.