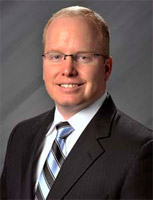 Michael Nelson is in his 15th season as Team Penske's Vice President of Operations, overseeing the organization's teams competing in the NASCAR Cup Series and NASCAR Xfinity Series. Nelson also oversees the transportation, manufacturing, athletics, and facilities for all of Team Penske's racing operations.

An Anderson, S.C., native, Nelson joined Team Penske in 1998 as a data acquisition engineer. In 2000, Nelson was given the opportunity to become the engineer for the startup team with Ryan Newman as the driver. In 2006, Nelson became crew chief for the Team Penske No. 12 Cup Series team. He was promoted to his current post, which reports to Tim Cindric, President of Team Penske, in November of 2007.

A Clemson University graduate with a master's degree in mechanical engineering, Nelson initially had no interest in NASCAR. His passion from age nine was motorcycles and motocross racing. He became involved in motocross racing at age 14 and competed at tracks around the southeast.

Nelson and his wife Kim have a son, Carter, and daughter, Claire.