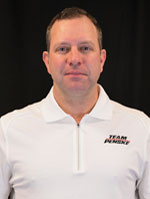 In his 18th season with Team Penske in 2021, Brian Wilson returns as crew chief of the NASCAR Xfinity Series (NXS) championship-winning No. 22 Menards/CarQuest/PPG/Snap-on/Enersys Ford Mustang, driven by Austin Cindric.

Last season, Wilson and Cindric combined to produce a season for the ages as the No. 22 team recorded six series victories along with 19 top-five and 26 top-10 finishes en route to the 2020 NXS Championship. The performance marked Wilson's first title as a crew chief.

The championship seeds were sewn for the No. 22 team during the 2019 season when the Wilson/Cindric tandem produced two victories, four poles, 14 top-five and 24 top-10 finishes in 33 starts. As Cindric raced into the NXS Playoffs, Wilson helped guide the team to a sixth-place finish in the final series standings.

During the 2018 NXS season, Wilson forged a bond with Cindric as the No. 22 Ford won three series poles and scored six top-five finishes along with nine top-10 results in 16 starts. Wilson also led the team to six race victories that season with Team Penske Cup Series drivers Brad Keselowski, Joey Logano and Ryan Blaney all driving to Victory Lane.

Prior to becoming a crew chief with the Team Penske NXS program, Wilson spent five consecutive seasons as the race engineer for the No. 2 Team Penske Ford driven by Keselowski in the NASCAR Cup Series (NCS). During his time as race engineer, Wilson played an invaluable role in helping Team Penske reach the highest levels of the sport. Wilson engineered Keselowski and the No. 2 team to the 2012 NCS Championship and he also helped the No. 22 Discount Tire team and Keselowski win the 2010 NASCAR Xfinity Series crown.

A second-generation race engineer, Wilson is a native of Detroit, Mich. He grew up around racing and began competing in go-karts at age eight. His father, Steve, was also a racer and in 1995 served a race engineer for the No. 33 Skoal Bandit Cup car.

Wilson started working part-time at Frank Kimmel's championship ARCA team while attending North Carolina State University. After receiving his degree in mechanical engineering, Wilson joined Kimmel's operation full time as the team's shock specialist. Wilson's father, who retired from engine research and development for Richard Childress Racing, put his son in contact with Team Penske in 2004. Wilson worked on the No. 77 car before joining the No. 2 Miller Lite team as a shock specialist in 2006. He was named race engineer prior to the start of the 2007 season.

In 2009, the NC State graduate transitioned to the No. 12 car with David Stremme behind the wheel and helped the team earn 11 top-20 finishes along with eight top-15 starting spots.

Wilson teamed with crew chief Paul Wolfe in 2010 to give the newly-formed No. 22 Discount Tire team some veteran leadership during its first season in the NASCAR Xfinity Series. Wilson, Wolfe and the team built fast racecars that Keselowski drove to the 2010 NXS Championship, the first NASCAR title for Team Penske. Wolfe then kept Wilson by his side after he was named crew chief of the No. 2 Miller Lite entry in the NASCAR Cup Series for 2011.

The combination once again proved successful, this time on NASCAR's biggest stage. Producing three wins and five top-five finishes during the summer months, the "Blue Deuce" qualified for the 2011 Playoffs and finished fifth in the final series standings. An even brighter horizon dawned in 2012 as the Miller Lite team won five races - including two during the Playoffs - as it captured the first Cup Series Championship for Roger Penske.

Ready to build on the success of the 2020 season campaign with the talented Cindric, Wilson looks to lead the team to its second consecutive series championship and secure the sixth NXS Owner title for the No. 22 team and Roger Penske in 2021.