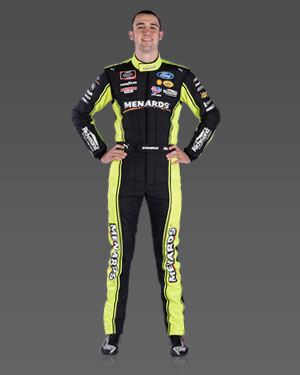 Carrying the pride and performance of a NASCAR champion, Austin Cindric is ready for the challenges of the 2021 season. Cindric looks to defend his NASCAR Xfinity Series (NXS) title this season as he returns to Team Penske to compete in his third full-time season racing the No. 22 NXS Ford Mustang. The 22-year-old Mooresville, NC native will also make several NASCAR Cup Series (NCS) starts for the team during the 2021 season.

In 2020, Cindric demonstrated a winning combination of promise, progression, and patience as the No. 22 Team Penske Ford Mustang team enjoyed a memorable run culminating with the NASCAR Xfinity Series (NXS) championship. Cindric began to hit his stride in July when he became just the second driver in series history to win five out of six NXS races. The impressive streak of success included a sweep of the doubleheader weekend at Kentucky Speedway, a victory at Texas Motor Speedway and back-to-back wins at Road America and the inaugural road course race at Daytona International Speedway. The victory at Road America also marked Team Penske's 200th NASCAR win.

Cindric's NXS production in 2020 included a career-best of 947 laps led in the No. 22 Ford and 11 stage victories as he became the first Team Penske driver to claim the regular season championship under the series' updated points system. With steady performances throughout the NXS Playoffs, Cindric raced his way into the Championship 4 title race at Phoenix Raceway. In his 100th career NXS start, Cindric dominated the championship battle as he led 72 laps and pulled away from the competition during a thrilling overtime race restart to earn his eighth career series victory and his first NASCAR championship.

In 2019, Cindric demonstrated a knack for performing with consistency over the course of the 33-race NXS season. The young driver won back-to-back races in the middle of the season, capturing his first career Xfinity Series victory at Watkins Glen International. The following weekend at the Mid-Ohio Sport Car Course, Cindric had a dominant performance for his second consecutive win, as he won the pole and led 46 of 75 laps en route to victory.

He completed his second full season of Xfinity Series racing, and first with Team Penske, with 14 top-five and 24 top-10 results, advancing to the Round of 8 in the 2019 NXS Playoffs before finishing sixth in the final point standings.

In his first full NXS season in 2018, Cindric proved he could adapt to changing environments as he raced for two different organizations and three different teams while he produced solid results across the board. He made nine starts for Roush-Fenway Racing, competed in eight races in the No. 12 Ford Mustang for Team Penske and he drove 16 events in the No. 22 Team Penske Ford, including a memorable Playoff pursuit to close the season. Cindric captured three poles and posted podium finishes at Mid-Ohio and the Charlotte Roval. He finished his 2018 rookie NXS campaign with seven top-five and 13 top-10 finishes as he got his first taste of the series Playoffs and finished eighth in the championship standings. Cindric was the youngest of the 12 drivers to qualify for the series postseason.

In 2017, Cindric made his NXS debut racing at Road America for Team Penske. Competing in the No. 22 Discount Tire Ford Mustang, Cindric started on the pole when the field was set by owner points and he finished in 16th place for a solid result. The effort contributed to Team Penske's fourth NXS owner championship won by the team that season. Cindric also raced the full NASCAR Gander Outdoors Truck Series (NGOTS) season in 2017 competing for the BKR, the team then owned by his current Team Penske teammate, Brad Keselowski. Cindric earned his first Truck Series victory from the pole at Canadian Tire Motorsport Park. He delivered 16 top-10 finishes, eight top-five results, one pole position and he led 106 laps on his way to finishing third in the 2017 NGOTS championship standings.

Cindric made his NASCAR debut in 2015 competing in two events for BKR. He returned to BKR in 2016 and recorded three top-20 finishes in four races that season. Cindric also captured his first ARCA Racing Series victory in 2016 at Kentucky Speedway, and he produced two wins in the NASCAR K&N Pro Series East events at Watkins Glen International and Virginia International Raceway that same season.

Despite his young age, Cindric is considered one of the most diverse drivers competing in the NXS Series. Along with his NASCAR experience, Cindric has also competed in select IMSA WeatherTech SportsCar Series races, including the Rolex 24 at Daytona, and in the Continental Tire Series as he won the IMSA Pilot Challenge at Road Atlanta. Cindric has also raced in the Pirelli World Challenge Series, Red Bull Global Rallycross and the Virgin Australia Supercars Championship over the course of his young career.

A three-time Presidential Fitness Award Winner who was nominated to the Team USA Scholarship team in 2015, Cindric currently resides in Mooresville, NC.