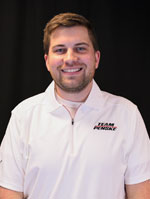 It will be difficult to top his first season with Team Penske, but Matt Mote is certainly ready for the opportunity, as well as a new challenge, in 2021.

Mote served as the race engineer on the No. 22 Ford Mustang that Austin Cindric drove to the NASCAR Xfinity Series (NXS) Championship in 2020. This season, Mote will continue to work alongside crew chief Brian Wilson as the race engineer for Cindric and the No. 22 Menards/CarQuest/PPG/Snap-on/Enersys Ford Mustang as the team looks to defend its title.

In addition, Mote will embrace a new opportunity as he will serve as race engineer on Team Penske's No. 33 NASCAR Cup Series (NCS) team, which will compete in select events this season with Cindric earning his first taste of NCS competition.

In 2020, Mote helped the No. 22 Ford NXS team produce some impressive results. Cindric captured six race victories in the Ford Mustang, along with 19 top-five finishes and 26 top-10 results. The magical season was highlighted by a dramatic overtime victory in the season finale at Phoenix that clinched the series championship for the No. 22 team.

Before he joined Team Penske prior to the 2020 season, Mote served as the race engineer for GMS Racing and the No. 23 car driven by John Hunter Nemechek in 2019. Mote helped lead the No. 23 team to six top-five and 19 top-10 finishes as the team enjoyed a strong Playoff run and finished seventh in the series championship standings.

A native of Columbus, Ind., Mote's passion for racing developed early on in his life. From middle school to college, he raced karts on dirt ovals and while working on his own kart, he cultivated his craft and enthusiasm for engineering.

Mote attended Indiana University Purdue University Indianapolis (IUPUI) where he earned a Mechanical Engineering Technology degree in May of 2017.

Mote began his career in racing working as an intern for Hendrick Motorsports. He joined Thorsport Racing in 2016, working with Rico Abreu and Grant Enfinger on the No. 98 NASCAR Gander RV & Outdoors Truck Series. Mote then transitioned to GMS Racing, working with the No. 96 NXS team and driver Ben Kennedy, before he joined the No. 23 team. Mote gained valuable experience working with some of the biggest names in racing during his rapid rise in the sport including A.J. Allmendinger, Alex Bowman, Bill Elliott and Chase Elliott. He also helped Spencer Gallagher capture an NXS victory at Talladega in 2018.

The 26-year-old Mote will try and add to the winning legacy of the No. 22 Ford Mustang team this season as he works with Wilson, Cindric and the team to pursue the squad's sixth Xfinity Series Owner title and third series driver championship in its history.

On the Cup Series level, Mote will work with Samuel "Miles" Stanley, who will get his first opportunity as an NCS crew chief, with Cindric behind the wheel of the No. 33 Ford Mustang for several races this season.

When Mote is not at the racetrack, he enjoys spending time on the lake with his wife and two-year-old Golden Retriever, Tucker.