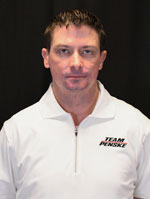 Matt Swiderski is in his third season with Team Penske in 2020 and he will once again lead the No. 12 Ford Mustang team that will compete with a partial-season schedule in the NASCAR Xfinity Series (NXS) this season. The team is expected to feature Cup Series drivers Brad Keselowski, Joey Logano, Ryan Blaney and Matt DiBenedetto for select NXS races in 2020.

Swiderski led the No. 12 team to five top-five finishes and three poles in just eight races during the 2019 season. The team won poles with three different drivers last season and earned its best finish with Logano as he produced a runner-up result at Chicagoland Speedway after starting from the pole.

Swiderski joined Team Penske before the 2018 season following a successful run with Richard Childress Racing (RCR), where he worked as crew chief of the No. 3 NXS team with drivers Ty Dillon, Scott Lagasse Jr. and Brian Scott. The 2017 season marked Swiderski's first full-time season as a NASCAR crew chief after successfully working his way up through the stock car ranks.

Before becoming a crew chief, Swiderski led the vehicle performance efforts at RCR for three seasons, as he oversaw a team of 25 race engineers, simulation engineers, performance engineers and software developers. Swiderski was largely responsible for RCR's growth in research and development and diversifying its engineer staff.

In 2005, Swiderski joined RCR's engineering staff and spent three years working as a data acquisition engineer before being assigned to race engineer for the No. 2 RCR Xfinity Series entree in 2007. Swiderski helped driver Clint Bowyer earn two race wins in 2007 and produce a championship-winning season in 2008.

Swiderski was promoted to race engineer of the NASCAR Cup Series No. 07 car with driver Casey Mears in 2009 and he spent the 2009-2011 seasons working with Mears and Kevin Harvick. Working on the No. 29 car in 2010 and 2011, Swiderski helped the team produce three Cup Series wins and finish third in the 2010 championship.

Swiderski briefly stepped away from racing in 2012 to join Space Exploration Technologies (SpaceX), a private aerospace manufacturer and space transport provider in Hawthorne, California founded by Elon Musk. Serving as a loads engineer in the dynamics group, he worked on some of the world's most advanced rockets and spacecrafts. After just eight months in the new role, Swiderski returned to racing as chief race engineer for RCR and was named head of vehicle performance in January 2014.

Swiderski and his wife Amanda reside with their daughter in Clemmons, NC.